We are proud to present our implementation of the AMP Cancer Classification guidelines in the VarSome suite. This new feature is available in both VarSome Premium and VarSome Clinical; all VarSome users already benefit from the additional databases added in January.

The automated AMP classifier has been developed in conjunction with our clinical advisors, leveraging the existing VarSome databases & infrastructure, but also including many new or improved databases.

The full documentation for our new AMP classifier can be found here.

We use the following databases to identify whether the gene is associated with cancer:

We consider the following databases to identify clinical trials or drugs associated with the gene considered:

The classifier further leverages the list of FDA approved drugs.

We aggregate samples from the following cancer databases:

VarSome now has two options when annotating a variant: Germline or Somatic.

When Somatic is selected, you are first invited to provide optional information about the cancer type, tissue, and basic patient details. 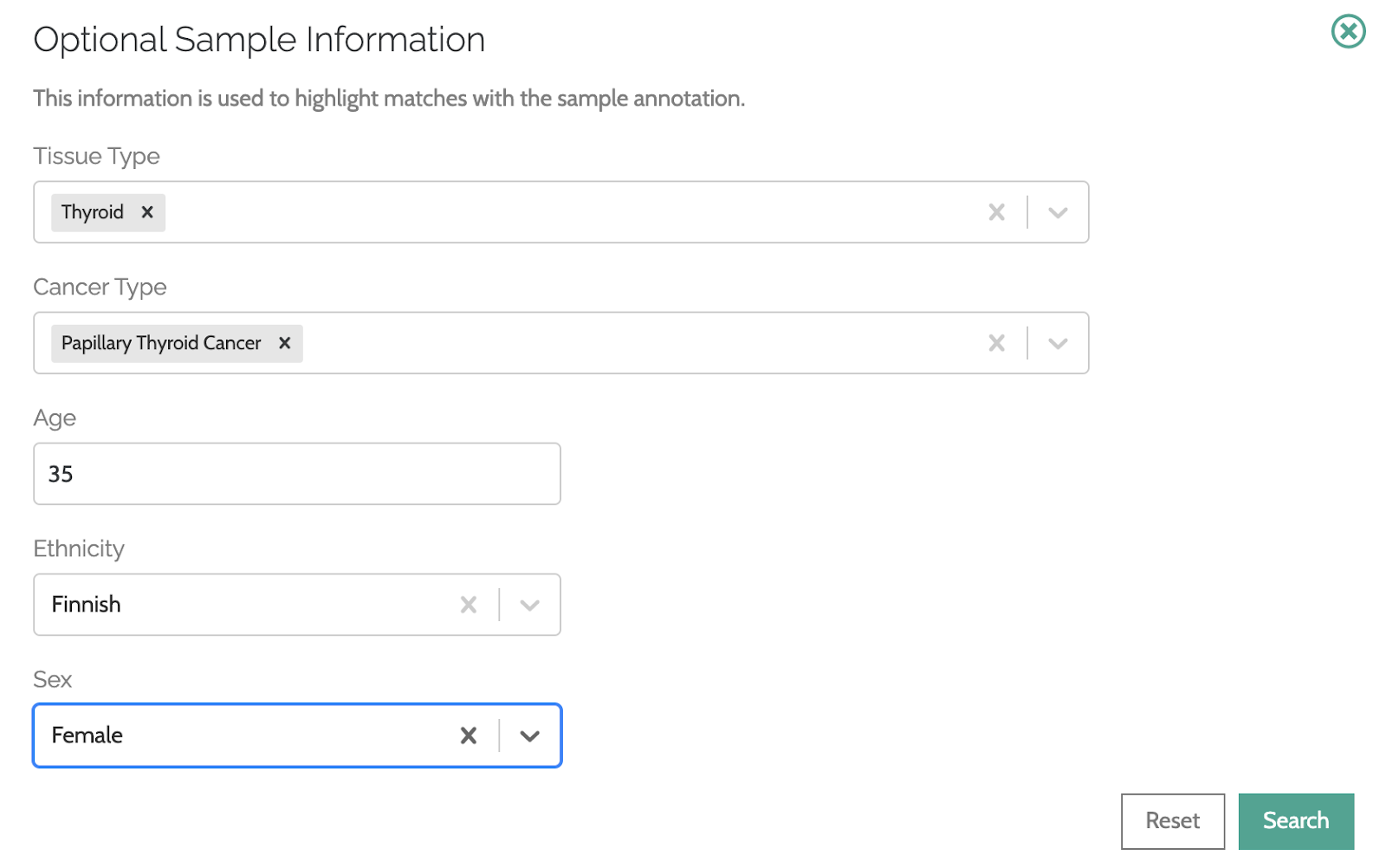 This information is then used to augment the AMP classifier and also to indicate possible matches in the various somatic databases used:

(note that this feature is available in the free VarSome too).

This remains the default mode, however, if you annotated a variant found in a cancer gene, the ACMG component will prompt you to optionally re-annotate using the Somatic mode. 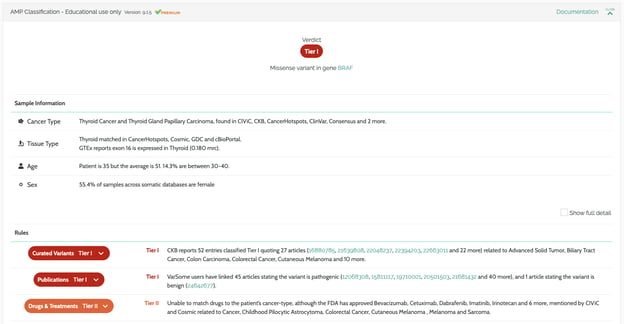 This includes a summary of the matches found with the optional patient sample data:

Tick “Show full detail” if you want to see the full depth of data that was considered by the classifier. The default only displays the most significant source of data for type of evidence.

Note: the ACMG classification is also still provided for reference and may be quite different from the AMP classifications: many AMP Tier 1 variants may appear as VUS in ACMG for example, whilst many germline pathogenic variants are not related to cancer.

We are only allowed to provide the Sanger Cosmic database to users who can prove they are academics, or that they have purchased their own Cosmic license.

We have licensed Jackson Lab’s Cancer Knowledge Base and integrated it into VarSome Clinical. This adds a wealth of information covering cancer variants, pathways, drugs & treatments.

New options in the VarSome Clinical menu are available to launch a cancer analysis from FastQ or VCF and Tumor/Normal. 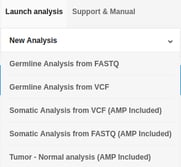 On launching the analysis, you will be prompted to add optional background information about the sample, which cancer type we are looking for, which tissues the sample is from, and even the age & ethnicity of the patient if available. As in VarSome, this extra information does not directly affect the annotation itself, but helps highlight variants that match the criteria provided.

By default the new AMP columns are displayed first, followed by the standard ACMG results. The variants are ordered by AMP tier in decreasing order of pathogenicity.

All the files that can be downloaded for an analysis (e.g. the QC report, annotated VCF, bam files etc.) can now be found in the new "Downloads" section that can be found on the analysis actions menu.

The new AMP annotation will also be available in the VarSome API, along with those additional databases.

To enable the AMP annotation on your requests you need to add the add-AMP-annotation GET parameter. You may also use several other parameters to finegrain the AMP annotation such as, age, gender, cancer-type, tissue-type.  Cancer and TIssue type names used correspond to http://oncotree.mskcc.org . An example therefore of an API request to retrieve back AMP annotation and relevant data would be:

The response from the API will include an amp_annotation property you can parse to access the AMP verdict, rules & explanations.

Our updated cancer pipeline was released on the 26th of January 2021 and this release includes no further changes.

There is a minor change to the in silico sources used for ACMG: we now only consider the
Cosmic::FATTHM score for tumor samples, not for germline samples.

Support will continue to be provided by the usual Saphetor email: support@varsome.com

However we are also very keen to hear back from you if you have any questions about the new cancer annotation & automated AMP classification. This is clearly only a first step and we plan to offer many new features in future releases.